NewTek, makers of TriCaster, launched a new video standard called Network Device Interface (NDI) in late 2015. Beginning in May 2016, ProPresenter 6 supports outputting to NDI. The goal of NDI is to simplify video workflows by allowing devices to communicate and send frame-accurate video and audio over standard network cables. For more information, click to read more about NDI on NewTek's website.

The NDI output will replace an SDI output; the two cannot be used simultaneously. Currently, NDI only supports a single output stream, so it doesn't replace the functionality of the Alpha Keyer Module. You can still use a DVI/VGA/HDMI output as long as it is the same resolution. (For example, you can't output 1024x768 for standard output and 1080 for NDI.) As with the SDI module, NDI cannot be used for Stage Display.

Configuring your TriCaster is also fairly simple, although you might have to reselect some of the settings a couple of times to get it to detect ProPresenter initially.

The NDI input will need to be assigned to one of the Network inputs. Double-click the NET 1 input, or click the gear icon next to the name, to open the Input Settings. Select Pro6NDIVideo for the connection. You shouldn't need to change any other settings. If your TriCaster doesn't see the signal from ProPresenter, try Disabling the Connection and then reselecting in. In our testing, it has required reselecting the option a few times for it to connect. Once it is connected, it should stay available, even when you quit ProPresenter. Once the TriCaster is receiving the NDI stream from ProPresenter, you can treat it like any other input. 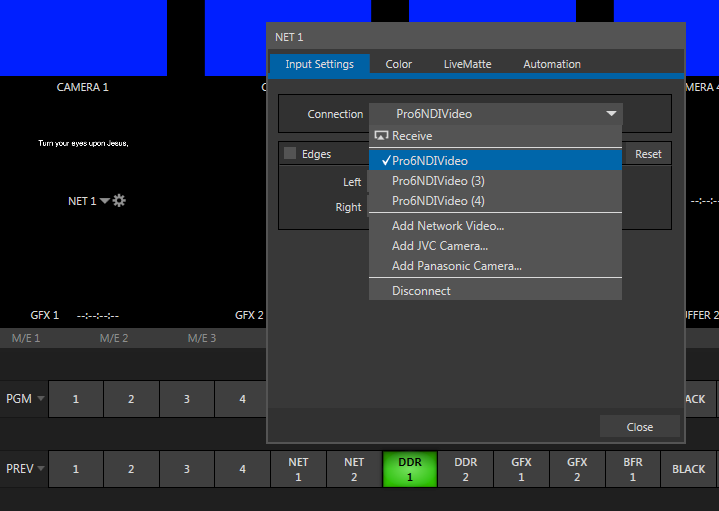 Audio is also currently routed through NDI to the TriCaster, so you will need to connect your TriCaster to your sound system if it is not already connected.