ProPresenter has a powerful import feature that lets you import many file types and bring that data into ProPresenter. For example, if you have a musician email you text files of the songs you will be singing, or if your speaker has his notes in a Word Document, you can import these into ProPresenter.

The import feature of ProPresenter offers a wide range of available file types for import. The most common would be .txt, .rtf, .doc, and .docx. You can also import from the computer's "clipboard" (that is, text that you have copied from another source).

Note that PowerPoint importing works differently and will not be covered in this article.

When you import a file, it will bring up the Import window: 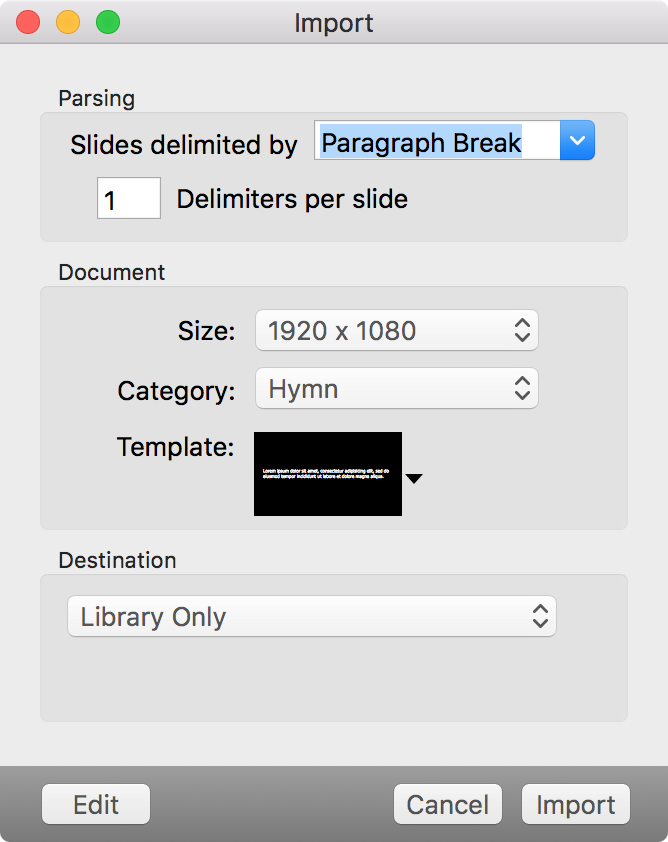 Typically you want to leave these settings on their default, however, you can change them if needed. For Parsing, you can change how ProPresenter will desire to add a Slide Break, and how many of those delimiters you want per slide. (For example, selecting "Line Break" and "2" will put two lines per slide.)

The next section covers how the Document itself will be formatted, and below that, you can control where the Document will end up.

In addition to importing the text itself, you can also add some special text to control how ProPresenter imports the file. For example, if you have a line with only one of the lines of text below, then ProPresenter will create a new Group with the text as the title of that Group: