ProPresenter makes it possible to import PowerPoint files. However, there are some limitations that you will need to be aware of before you get started. It's important to remember that importing from a third-party like PowerPoint is not a simple process and we are often limited in what we are able to support or something may stop working unexpectedly following an update from Microsoft.

The biggest limitation right now is that the Windows version of ProPresenter 7 is only able to import PowerPoint files as images. If you have used ProPresenter 6 on Windows or ProPresenter on Mac, you're familiar with the other options that are available. We hope to find a way to add these back to ProPresenter 7 on Windows in the future.

You will need to have a full version of PowerPoint installed in order to import presentations. We recommend Office 2019 or Office 365 on both Mac and Windows. Office 2016 may still work, but due to changing support policies and timelines for this version from Microsoft, it may not work reliably. PowerPoint Viewer may still work on Windows, but since it is no longer supported by Microsoft we are not recommending it or supporting it anymore.

To get started, open ProPresenter 7, click on File in the menu bar, select Import, and then PowerPoint. This will open a file browser window. Navigate to the PowerPoint file that you want to import.

For Windows users, once you find the file, click on the Open button. This will import the each slide as a single image. There is no way to edit the content of each slide without importing a new version of the PowerPoint file. 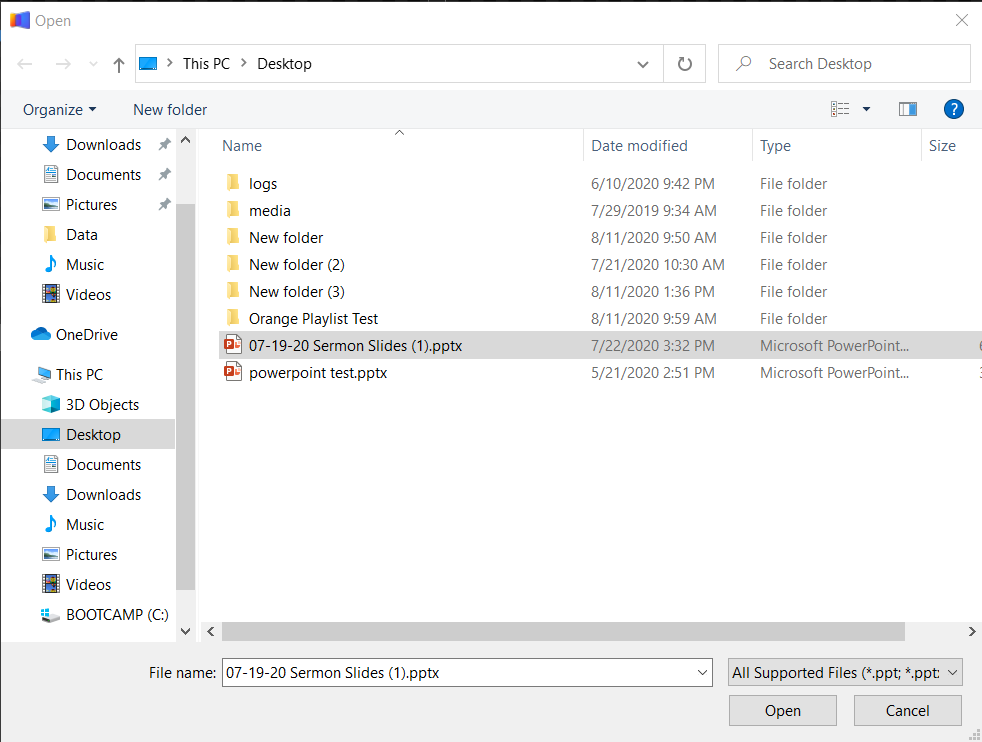 Mac users have three import options available. To access these settings, click the Options button in the lower-left corner of the Finder window. After you have selected your option for importing, click the Import button. 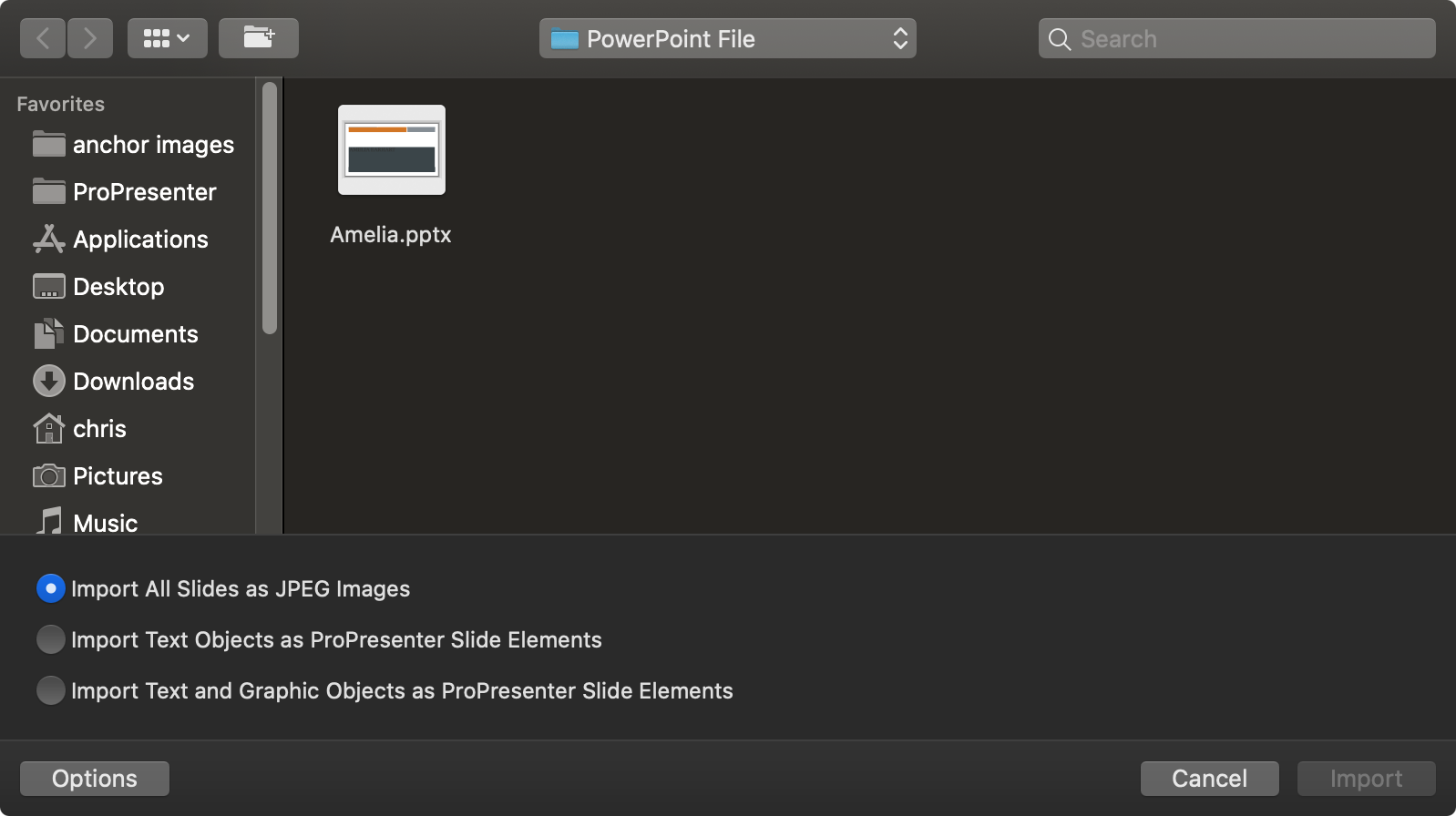 These three options will control how your files are imported. The option you select will be used for all future imports, so unless you need to change the import option, you shouldn't need to click on Options for every import.

Import All Slides as JPEG Images

This will import the each slide as a single image. There is no way to edit the content of each slide without importing a new version of the PowerPoint file. 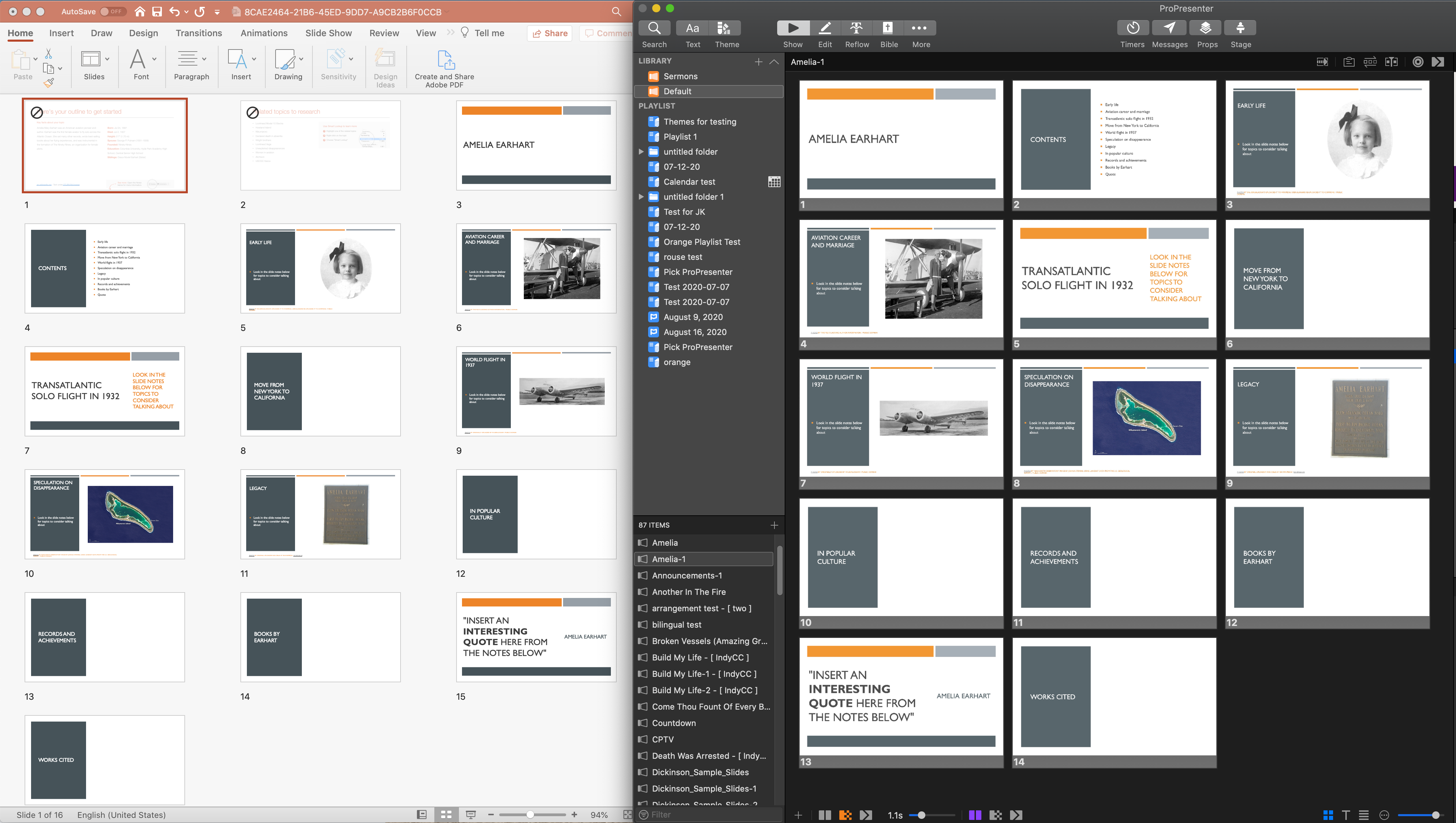 This option will import all of the text, but will ignore any media. While we will attempt to reproduce the slide accurately, not all elements or formatting can be converted. This method will get you close to the original PowerPoint slide, but you may still need to do some additional formatting in ProPresenter.

Hidden slides are not skipped with this import method. PowerPoint slide notes are also imported. As you can see, most of the slides look like the PowerPoint version, but a few slides need some additional work. None of the media elements are imported, however, shapes are imported. Slide builds and animations are not converted, so any slide with builds will import as the final version of the slide.

As you can see in the second image, each text object can be edited and there are slides notes. Currently, any non-text object that is not imported gets converted to an empty text box. These will not show on your output, but you may want to remove them in the Editor. 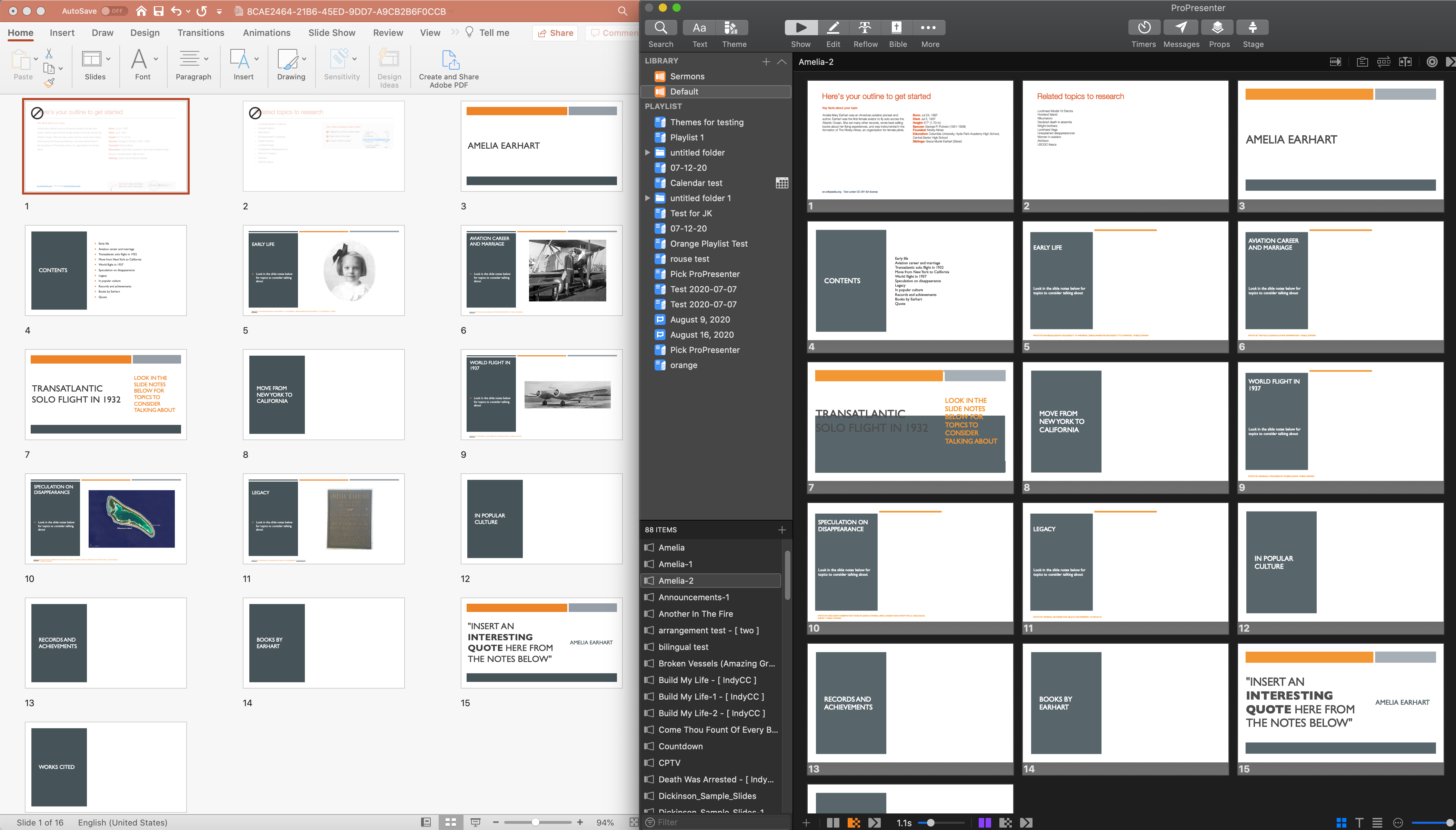 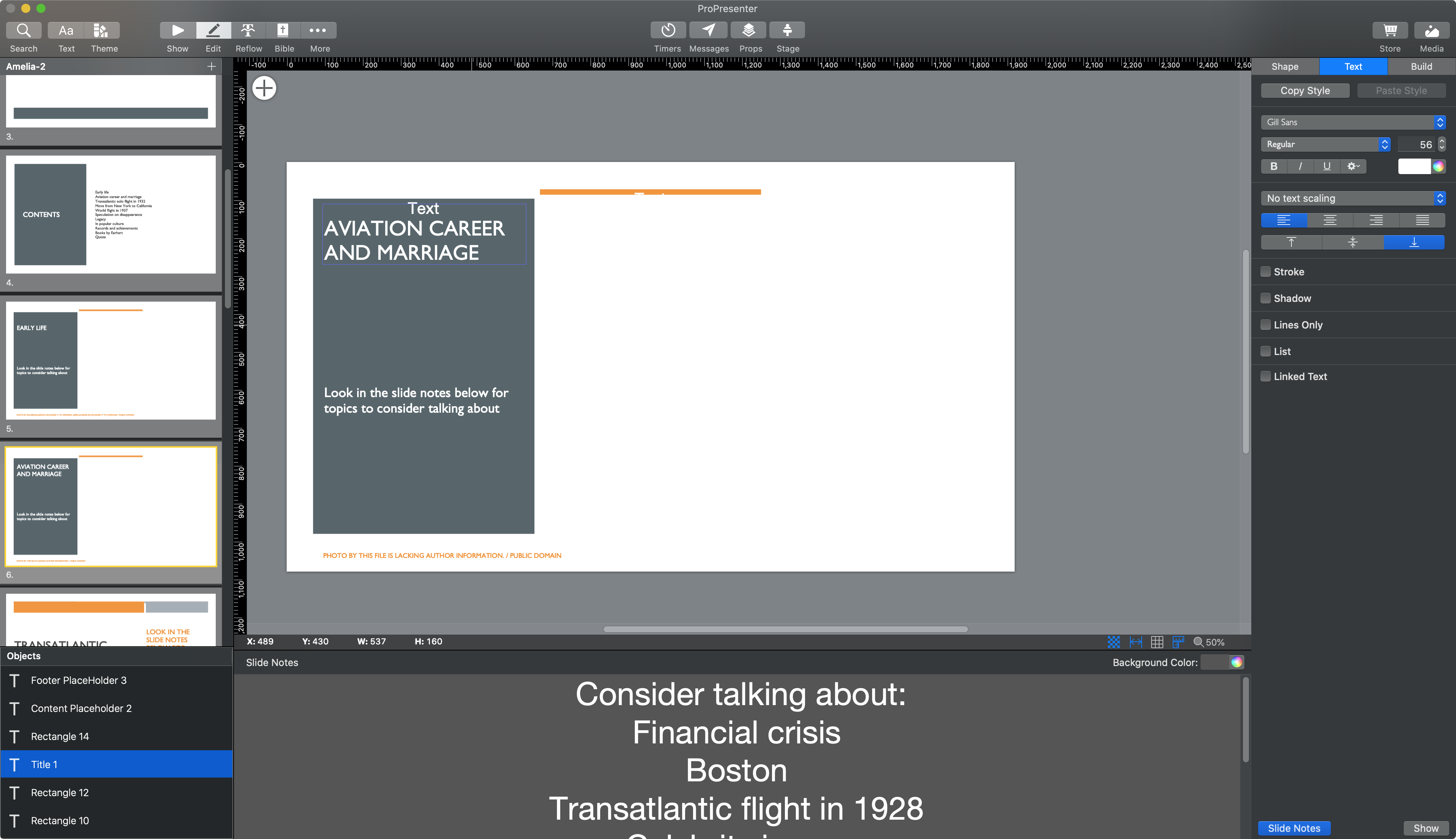 This import method is the closest representation to the original PowerPoint file. As with the Text Objects import option, some work will still need to be done in ProPresenter. Slide builds and animations are not converted, so any slide with builds will import as the final version of the slide.

As you can see in the second image, every object on the slide is able to be selected in the Editor and the slide notes are also imported. Some objects don't convert properly, and they will be added as empty text placeholders. We will continue making improvements to support more elements, but there may always be some PowerPoint slide objects that don't have an equivalent in ProPresenter. 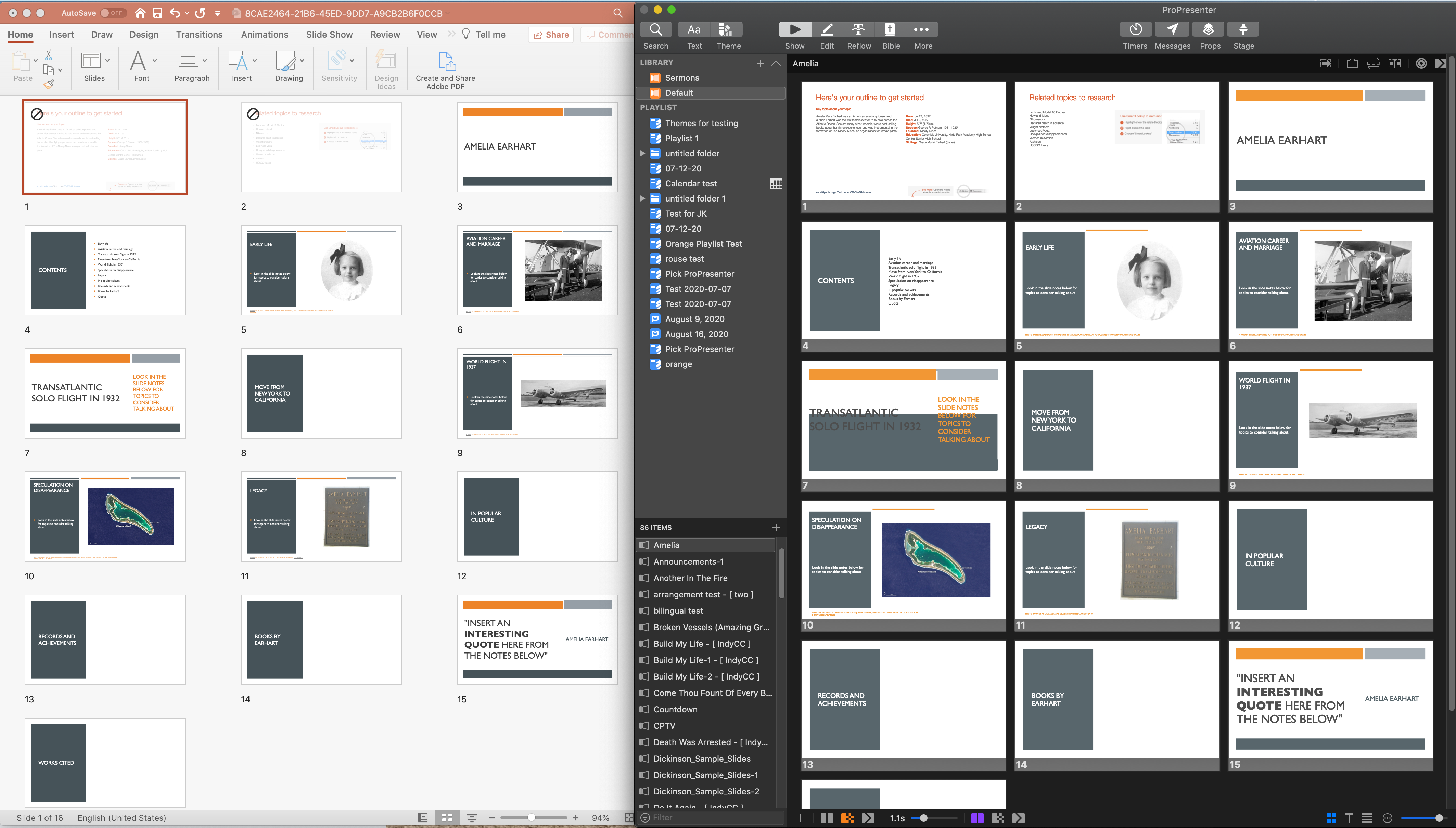 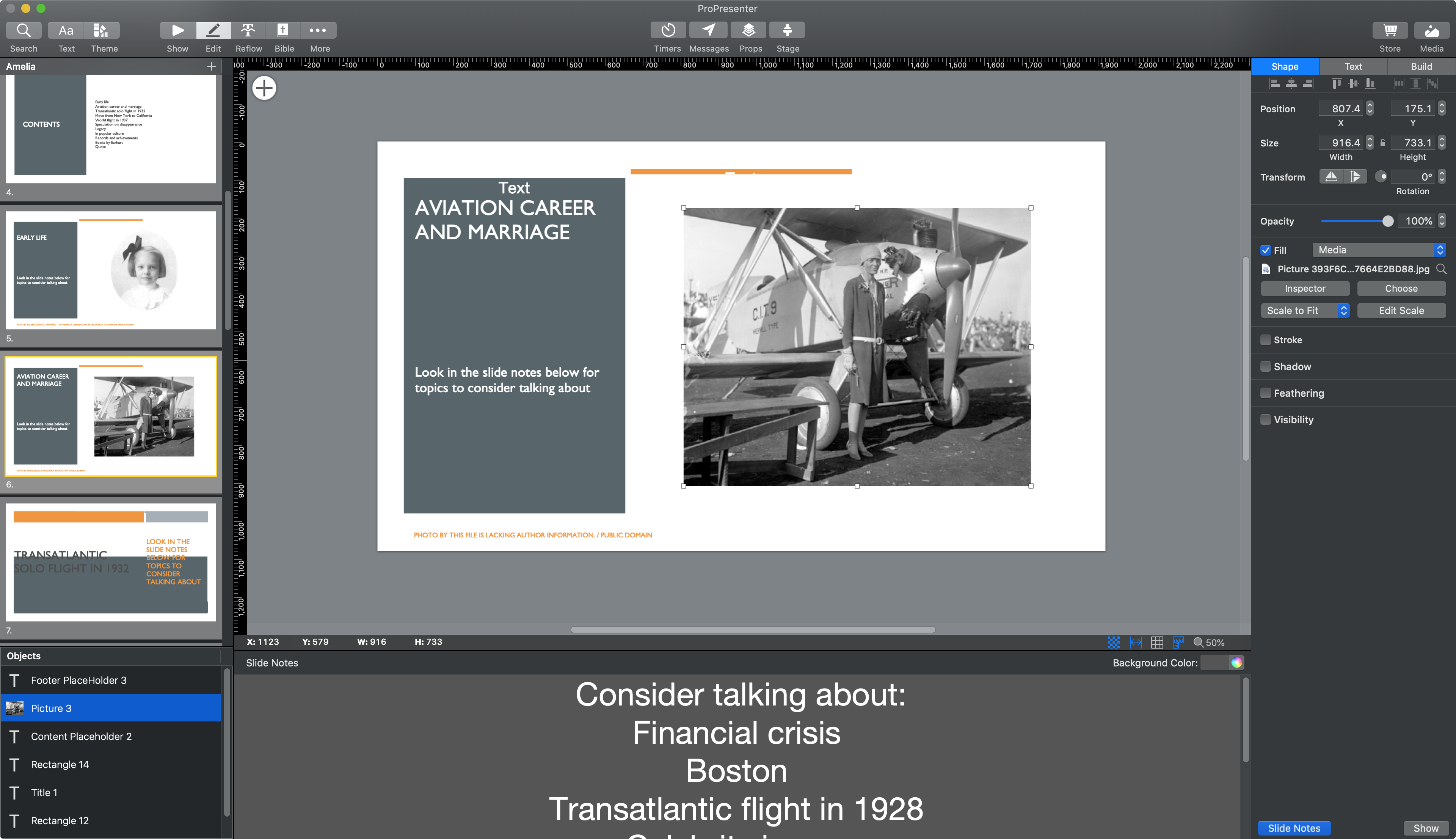